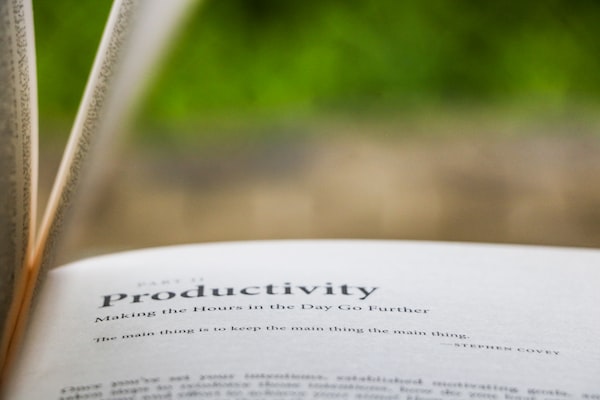 The Principles of Productivity

In this episode, we talk about Ali's favourite thing - productivity - much to Taimur's joy!

In this episode, we talk about Ali's favourite thing - productivity - much to Taimur's joy! Or, more precisely, we talk through the structure and some of the key points from Ali's upcoming Skillshare class on productivity including Parkinson's law, the Pareto principle amongst other myths, laws and principles...

Here are the highlights from the discussion in this episode:

Productivity equation begins from the base of ‘Useful Output / Time’. However this can be expanded to the following equation:

If you can increase the fun constant in everything you do it amplifies your productivity immensely because suddenly motivation, willpower, consistency etc – all of these things are no longer an issue.

Whilst time is an unending and uncontrollable process, OUR TIME is within our control and so it doesn't come down to having time, it comes down to making time and deciding how to use it and organise our priorities. Time is almost entirely within our control with barely any exceptions.

Motivation, broadly speaking, operates on the wrong assumption that a particular mental or emotional state is necessary to complete a task. If action is conditional on feelings, waiting for the right mood becomes a particularly insidious form of procrastination. We tend to have the equation the wrong way around rather than motivation leading to action, in fact, the feedback loop develops from action. So action leads to motivation which leads to more action, more motivation and so on.

Although we live in an era of multitasking, the human brain isn’t wired to multitask, and multitasking can actually damage productivity in the long-term. According to Dr. David Meyer, who conducted research into task switching in a 2001 study, “even brief mental blocks created by shifting between tasks can cost as much as 40% of someone’s productive time”. So in terms of productivity tips, learning to focus on single task is more important to increase our productivity than multitasking. The key message is that multitasking is not a proxy for productivity! Multitasking can limit our focus, hamper working memory and increase stress and mental fatigue.

The Pareto principle, also known sometimes as the 80/20 rule, states that roughly 80% of consequences come from 20% of causes - in essence, there is an unequal relationship between inputs and outputs. The advantage of the principle is that it can help us to recognise where we are extracting most value from our time, and is a useful tool to make us more aware of how to allocate our time and resources in the future to improve our productivity. Identify what 20% of your work drives 80% of your outcomes. This will also help you cut back on or improve the 80% of things that waste your time which generate only 20% of the results

The third law of productivity relates to Newton's first law of motion or the Law of Inertia which states that:

In other words, what is at rest remains at rest and what is in motion continues in motion. When we're procrastinating we're in a state of rest - motivation does not start the ball rolling - only action can act as the "external unbalanced force" to push us into a state of motion. Once moving, the feedback loop develops and it becomes harder to stop given that the desire to complete tasks provides the satisfaction necessary to continue moving.

The Power of Habits

Habits form an integral part of all our lives. Both conscious and subconscious habits can have a major impact on all aspects of our lives, from our health to our relationships, and critically for this Skillshare class - to our productivity.

As James Clear says, "Habits are the compound interest of self-development", they don’t seem to make much difference on a given day but the impact over months or years can be huge and immensely powerful.

The Power of Productive Downtime

We have a large quantity of random moments of downtime in any given day. Most of the time, we squander those. But if we're actually interested in productivity, getting more done with limited time, we can squeeze out a lot of value from those moments of downtime.

The Power of Productive Procrastination

If you do feel yourself procrastinating, then engaging in activities or reading that will have some sort of benefit to other areas of your life is useful. For example, Ali used to browse web design inspiration as procrastination, or watch coding tutorials. This afforded him skills that he then deployed in other areas of his life and business. Similarly, if you’re reading articles on the internet, highlighting relevant bits to reflect upon or refer to in your own lives can be a useful way to procrastinate productively.